Celebration of completion of our Heritage Lottery Funded project 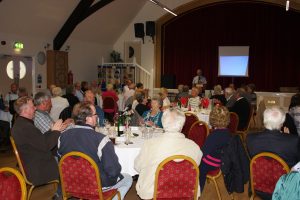 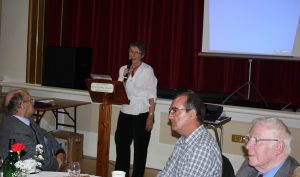 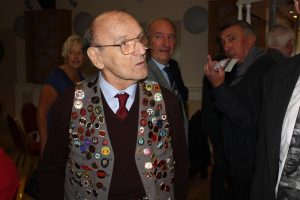 Brian Walker with his many badges 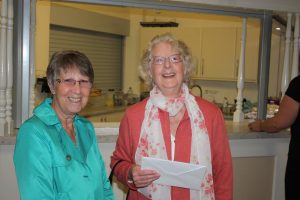 On Friday 4th October everyone involved in this project came to the Village Hall at Rainworth to celebrate.  Packages had been made up for each interviewee, with DVDs and CDs of their own interview included.

After the dinner Eric began by thanking everyone for coming. He was then to explain how the project had progressed.  Firstly, however, he asked for a minutes silence in memory of the following people, who had unfortunately passed away during the lifetime of the project:-

Dennis Brown (volunteer and interviewee) Michael Donnally and Angus (Gus) Broadfoot (volunteers), and Edward (Ted) Bishop, Bryan Bracegirdle, Terry Hoole, Gerald Smith, John Young and Ida Hacket (interviewees).  There were also 13 apologies sent in by those who could not attend.

Eric said that although the lottery funded project had come to an end we were planning to continue interviewing as soon as possible.

49 interviews had been completed and 6 compilations – all filmed, edited and burned to DVD.

He explained how the project had begun. This had been when he thought about Frank Ellis.  Frank had volunteered and fought against the fascists in Spain.  He survived, and came back to England in time to join the regular army and fought in the second  world war.  He rose through the ranks to become a captain in the parachute regiment, was parachuted into Arnham and fought in that ferocious battle.  Against all odds he survived that battle which many didn’t.  He returned to Britain after the war and was, like many others demobbed from the army.  He got a job in the local pit and went on to become the delegate at the pit.   He was a great orator and was very well respected in the Union.   The important bit is that no-one had recorded his very very interesting life before he passed away.   It was with this in mind that a decision was taken to bid for Heritage Lottery funding so the experiences of our ex and retired miners could be recorded.  He contacted Barry Johnson and Hilary Cave.  They gave tremendous help and then they introduced him to  Ann and Barry Donlan and the project really began to move forward.  John Davey then advised on what equipment was needed. He has been an excellent friend and is still helping with the computers today.

Eric wanted to place on record his thanks to all the interviewee’s.  He said it had been a pleasure and privilege to listen and marvel at their experiences, with a lot of laughs and a few tears along the way.  He thanked O H Parsons for their generosity in providing the offices, and he thanked all the volunteers, saying he could not have done the project without them.  Finally he thanked the Heritage Lottery Fund for having faith in the project, and especially Amanda Turner, she had been a delight to work with and her advice had been invaluable.  Also Ann Donlan, Secretary of our association had been an absolute marvel in helping to run this project.

Ann then spoke, and she was able to put into words the feelings of most of the people in the room about the coalmining community.  She said it had been a great privilege to be part of the project and to help to see it through to its successful conclusion.  She said that “without a doubt – the mining history we have recorded is unique and priceless and will be studied by the historians for many years to come…  but it was not done primarily for them, but for the men and women of the 6 communities whose priceless personal memories were in danger of being lost forever.”

Ann’s father had worked down the pit for 51 years, first at Crown Farm and then Rufford.  He was blacklisted in 1926.  He became  NUM Branch Treasurer and was a loyal defender of his Union.  He retired in 1969.  Ann grew up amongst miners.  She said underground coalmining is a very dangerous and frightening job.  The men who worked down there knew it through their injured  heads and bodies, through the scars, the broken bones, missing fingers, and damaged lungs.  There was a trust between workmates and they looked out for each other. There was comradeship, loyalty, solidarity.  The Association with the Union at its heart, is built on this enduring friendship.

What happened to the mines, the Association believes, was a politically motivated vendetta.  Coal continues to be imported in huge quantities whilst young people in coal mining communities cannot get jobs.

Despite this Ann said that “what shines through most strongly in the interviews is your pride in your work, your pride in each other, loyalty to each other and knowledge of your own strength when you work together to hold onto the best of the past.”

John Knight – Notts. County Councillor talked about his life being brought up in a mining community in Kirkby in Ashfield.  He congratulated everyone on the completion of the project. 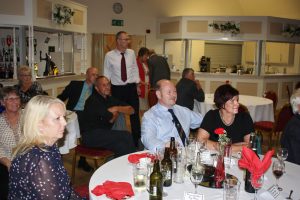