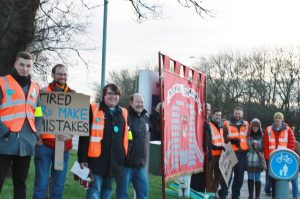 Notts NUM Ex and Retired Miners Association turned out to support the Junior Doctors, (on Wednesday 10th February 2016) in their on going dispute with the Government, which is trying to force through a contract on junior doctors which threatens the quality of care patients receive.

“Aneurin Bevan, who as Minister of Health spearheaded the establishment of the National Health Service, which was to provide medical care free at point-of-need to all Britons, was a coal miner who started work, age 13 at Tytryst Colliery.  Coal Miners have always been big supporters of our National Health Service – it’s always supported us and we want to support our NHS.  We support the Junior Doctors in their campaign for fair working conditions.”

Eric Eaton called upon the Government to negotiate with the Junior Doctors in good faith, to safeguard patient safety and doctors’ wellbeing.