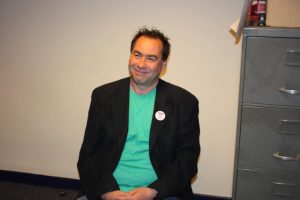 Ian says, “I gently persuaded by Dad that the only employment in Hucknall was the pit – so I should go down the pit.  I started my face training in September 1976.  My Dad was working at Annesley at the time.  On the underground face trips that you go on as part of your training, I went and saw my Dad actually on his job, ripping.  Annesley was on the same seam as Hucknall, which was the black shale.  A high seam of coal, very dusty, wet, hot, humid conditions.

“Everybody was wearing shorts and they were wet through with sweat.  I remember my Dad saying, this is how you will be in a few weeks time at Hucknall.

After I had finished my face training we had a couple of weeks on the top, unloading supplies and lorries in the stockyard.  This was mainly to ‘beef’ you up because we all looked like ‘young skinny rats”. 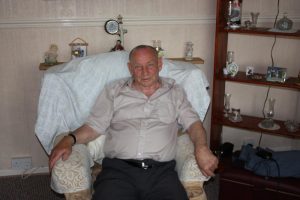 “I was at the top pit at Hucknall.  There were only three coal faces and all the coal went underground to the bottom pit.  There were no screeens at the top pit.  I went there for a week and was transporting materials with a pony, up and down.  Then they moved to Bestwood the next week for my training.

“A mini bus came on the Monday morning.  I was told  “Get your pit clothes on you’re going underground at Bestwood.

“I was hand filling.  We were chopping underneath first and then using the pick to pull pieces of coal off and then shovel it onto the belt.  And then I went to the bottom pit, to 15s, with Joe and we got 12 and half yards off between us;  Joe got 10 yards, he was paid for this because he was a Contractor.  I got two yards off …. two yards were mine to get out and timber up.” 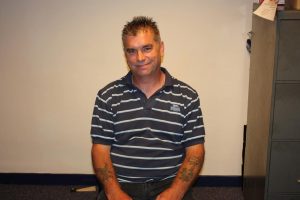 I grew up in Papplewick Village.  My dad was a miner all his life.  He did 40 odd years at the pit.  His brothers were all miners as well.

I started at Moorgreen training centre in 1974.  I was originally to go to Linby but most of my mates went to Hucknall and so that is what I did, to the bottom pit and mostly I was roadlaying.