Below are  photos taken at our inaugural fishing competition which was held on Saturday 10th August 2013 at Wellow Dam near Ollerton.  Congratulations to all who took part. We are told that it was a very good day with all the competitors enjoying the match.

The first photo  is of Arthur Jackson, who, along with Stan Shanks  was acting as bank Bobby.  Alan Spencer is weighing in the catches. The second photo is of George Walker with his winning catch, followed by the presentation of his trophy.  D Hatton came second and Derek Fountain came third. Congratulations to all the prize winners who were presented with a cash prize and a set of floats. The floats were donated by Chris Whittaker. 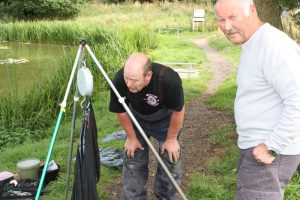 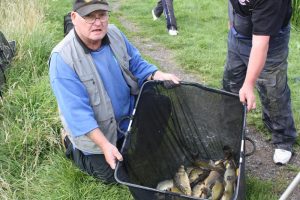 The Association would like to place on record our thanks to Arthur and Stan for giving up their Saturday to police the match and Alan Spencer who took over the running of the competition after Bob Collier fell ill and was unable to attend the match.

It was pleasing to hear all the anglers at the presentation say that they want the competition to be a regular event in the Association’s calendar which the Chairman has pledged to do.