The first trade unions in the British coal mining industry were established in the eighteenth century although records indicate the existence of combinations as early as the seventeenth century. One can find references to the rules of a Coal Miner Society in West Yorkshire during the late 1700s, and it is clear that similar organisations existed elsewhere. 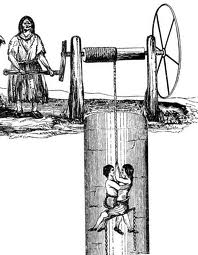 Trade unions were born in the mining industry out of the worst possible exploitation of human beings. From childhood, through adolescence and adulthood, miners (female as well as male) gave their very lives to profit-hungry mine owners.

Fully fledged slavery in the pits was not abolished until 1799 – and the miners of Tyneside were forced to submit each year to being bonded to their employer for nearly a century after that. 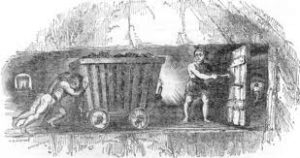 Child trapper in mine

Under conditions where children as young as four had to face a seventeen-hour day and a six-day week working underground, the District Unions (forerunners of the Miners Federation of Great Britain and the National Union of Mineworkers) were established to protect the interests and the lives of miners.

In the pits of Sheffield there was concerted action in 1792 when colliers employed by the Duke of Norfolk refused to work until their wages were raised. There are many examples of miners secret organisations taking industrial action.

The first attempt at national organisation. called the Miners Association of Great Britain and Ireland, took place in 1842. The same year, mineworkers and their supporters achieved a key piece of legislation, the Coal Mines Act, which made it illegal for mine owners to employ below ground women or boys under the age of ten. 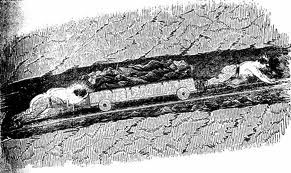 In 1844 the Association led a heroic five-month strike for better wages; however, pressure from the coal owners and the Government crushed it out of existence by 1848.

It was succeeded in 1863 by the Miners National Union, an organisation which concentrated its efforts on representing mineworkers in the courts and in Parliament rather than involving itself in industrial action, and confronting owners over pay and conditions.

Throughout the nineteenth century, conditions remained absolutely appalling, with major mining disasters claiming thousands of lives. Safety precautions were still non-existent: it took the death of 204 mineworkers at Durham Hartley Colliery in 1862 to force the Government and owners into introducing up cast shafts for ventilation. It was only following other major disasters that any sort of proper legislation began to appear.